An Audience With The Typhoon Display Team

As the season approaches its end, we have something a little different for you to look forward to.

An Audience With The Typhoon Display Team

We have teamed up with The Lincolnshire Showground their charity of the year the Jon Egging Trust and the Lincolnshire Brewing Co to bring you what is sure to be an interesting and memorable evening.

The evening will see Flt Jim Peterson and Sqn Ldr Ian Smith talk about their experiences on the team and across the RAF over the years. There will be an opportunity to ask questions, enter a charity raffle with fabulous prizes from ASALI, the Red Arrows and the Typhoon Display Team.

Who’s who and what’s what. 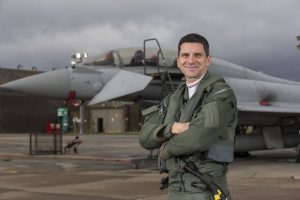 Fascinated by aircraft, Jimâs love of fighter jets and display flying was cemented at an Air Show aged 10 where he decided that he would one day fly fast jets. His varied career has included graduating from the NATO Tactical Leadership Program Course, Quick Reaction Alert duties in the UK and Falkland Islands, teaching students electronic warfare and how to operate a Typhoon. This year he has taken to the skies as the Typhoon display pilot attending air shows across the UK and abroad. Jim considers this opportunity as a âgreat honourâ displaying the aircraft in this milestone year – the RAFâs Centenary celebrations. 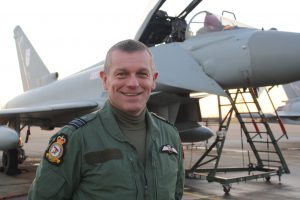 Ian Smith joined the Royal Air Force in 1983 and has been flying ever since, amassing almost 8,000 hours in the air. With a career spanning over 30 years, his postings have included Chinook helicopters based in Germany, a tour as a Red Arrows pilot and a year in Saudi Arabia as Team Manager for the Saudi Hawks Aerobatic Team. Smithy was pre-selected as Commanding Officer of the Battle of Britain Memorial Flight and after retiring from the RAF, was awarded an MBE in 2013. After two years with the Blades he re-joined the RAF in 2016 and is now posted to 29 Squadron at Coningsby.

Want to come along? What you need to know…

We will have some of our items on display, please get in touch if there is something specific you would like us to bring.