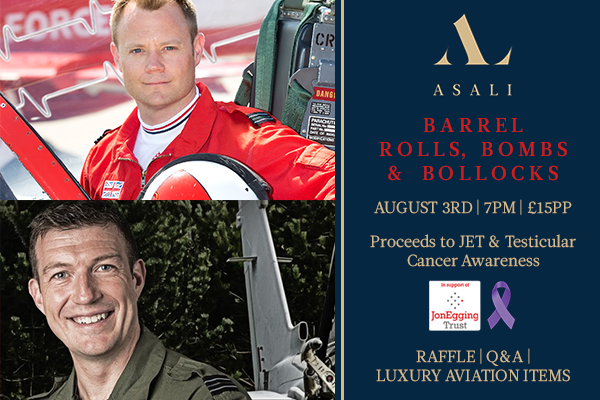 Join Red 5 and Flt Lt Al Pepper as they chat about their experiences on the front line, display flying, military and personal life.

Proceeds from the event will be split evenly between the Jon Egging Trust and Male Cancer Awareness Charities.

Back together for one night only friends Flight Lieutenant Chris Lyndon-Smith, Red 5 & Flight Lieutenant Alun Pepper, Britains Manliest Man invite you to join them at the Iconic Petwood Hotel, the former Officers Mess of the Dambusters, where they will be hosting an evening of frivolity, flying and friendship.

The evening will be great fun and as well as the talks there will be an opportunity for Q&A, a chance to purchase aviation related items from selected vendors and a raffle for money canât buy prizes.

Peps will talk about his flying career having seen Ops in N.Ireland flying the Wessex and Tornado GR4, where he flew with Chris, with tours over Iraq, Afghanistan and Libya. Peps also served as Lancaster Navigator on BBMF. In 2006 he survived Testicular cancer and as a keen awareness campaigner saw him crowned Britainâs Manliest Man in 2014, a title he still holds.

Flight Lieutenant Chris Lyndon-Smith Chris was born and raised in Africa until the age of 10 before his family decided to return to the UK. Chris has always wanted to fly and was in the Combined Cadet Force from the age of 13. Aged 16 he was awarded a Flying Scholarship. Chris joined the Royal Air Force in 1998 and after flying training was posted to the Tornado GR4. Following this Chris was then posted to 208 Squadron, Royal Air Force Valley where he served as a Qualified Flying Instructor (QFI) for three years, after which he was posted back to the Front Line in 2008 as the Squadron QFI.

Chris then achieved his ambition and was selected for the Royal Air Force Aerobatic Team where he flew as Red 2, 7 and 6 (syncro pair) between the years 2011 to 2013. Post his Red Arrows tour Chris was posted to 100 Squadron where he flew as one of the Aggressor pilots, before he rejoined the team in August 2016 as Red 5. 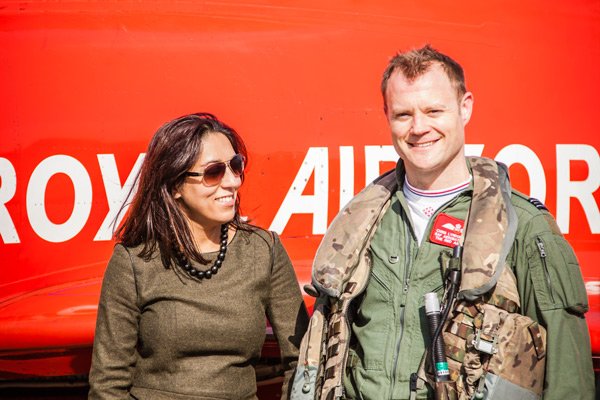 Format of the Evening

Keep following us on Facebook to find out what prizes we have….