Tales from a Spitfire Pilot…

All eyes to the skies.

If you have ever had the privilege of seeing a fly past by any of our outstanding military aircraft you were probably at an airshow or perhaps in London celebrating a national event. 2020 saw most airshows cancelled due to Covid 19 but there were some memorable aviation events, in-particular  celebrations for the 80th anniversary of the Battle of Britain and for Captain Tom Moore, celebrating his sterling work raising funds for our NHS.

In the flying seat!

As firm fans of the Supermarine Spitfire we are delighted to bring you the words of some of the RAF’s finest. From those honouring the memory of the fallen and bringing joy to discerning aviation fans across the country. We speak to pilots from the Battle of Britain Memorial Flight, based at RAF Coningsby and find out what it’s really like to fly a Spitfire as well as hearing about some of their own professional highlights.

Ian Smith had a long and distinguished career in the Royal Air Force, joining at the age of 18. His flying hours included time as a Red Arrows pilot and as OC Battle of Britain Memorial Flight.

Ian was part of the group that embarked on a record breaking flight with a restored Spitfire last year. The Silver Spitfire flew around the world departing from Goodwood Aerodrome and visited many countries that owed their freedom, at least in part, to this iconic aircraft. You can read more about this journey here. 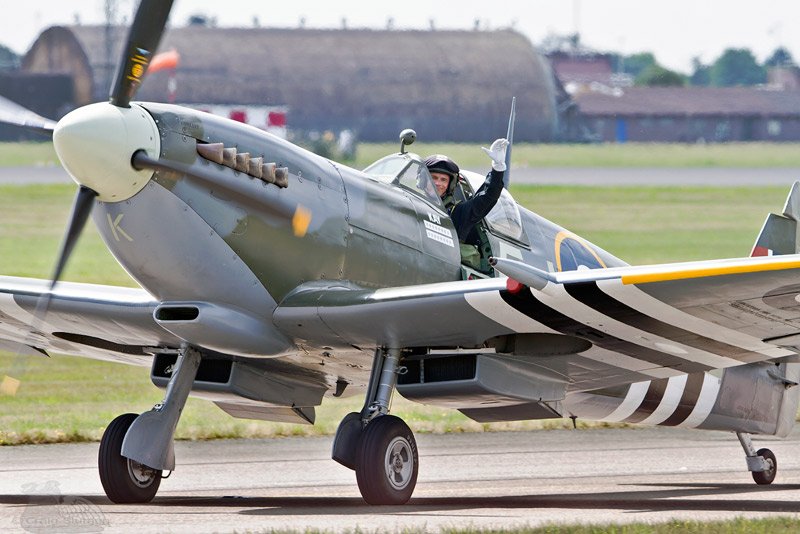 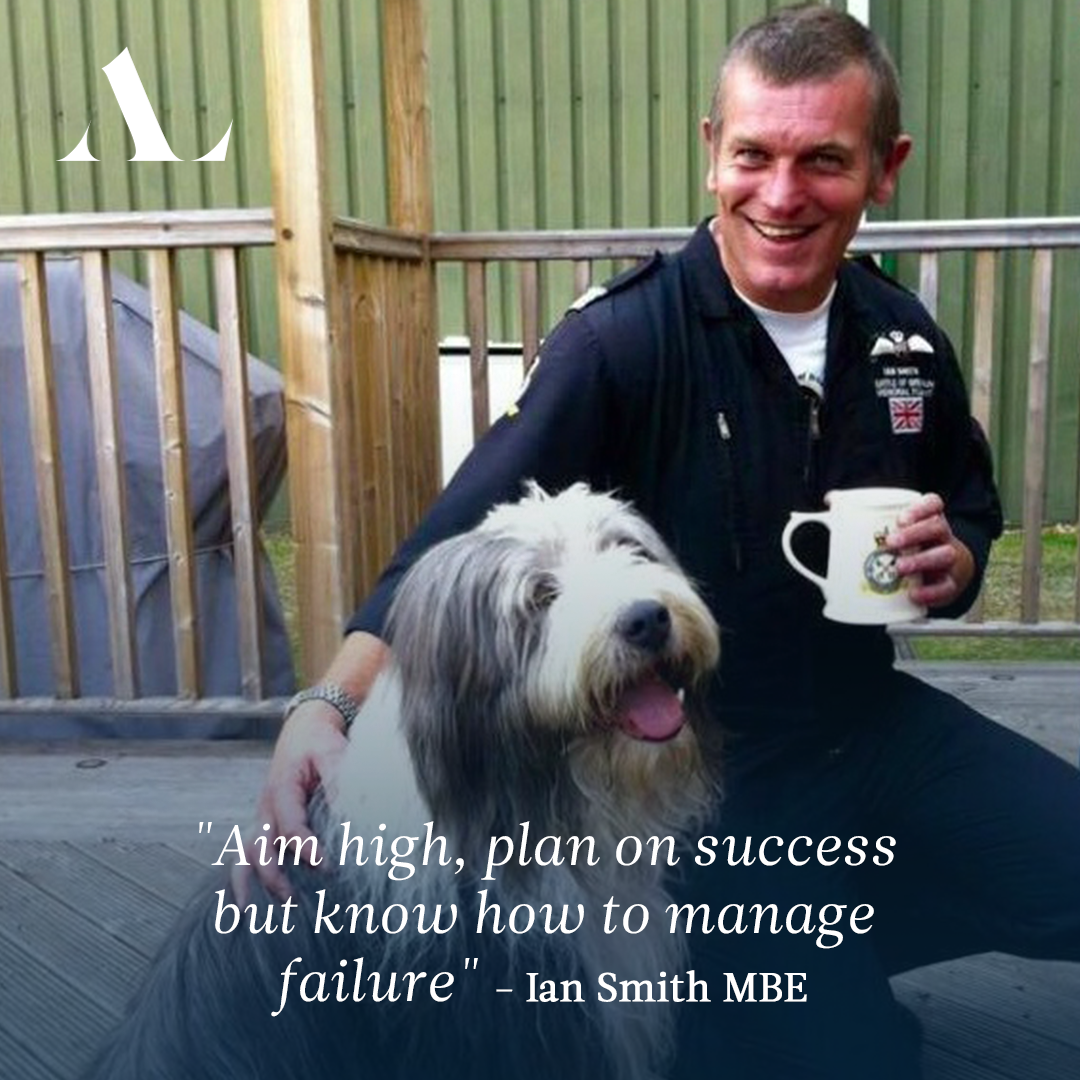 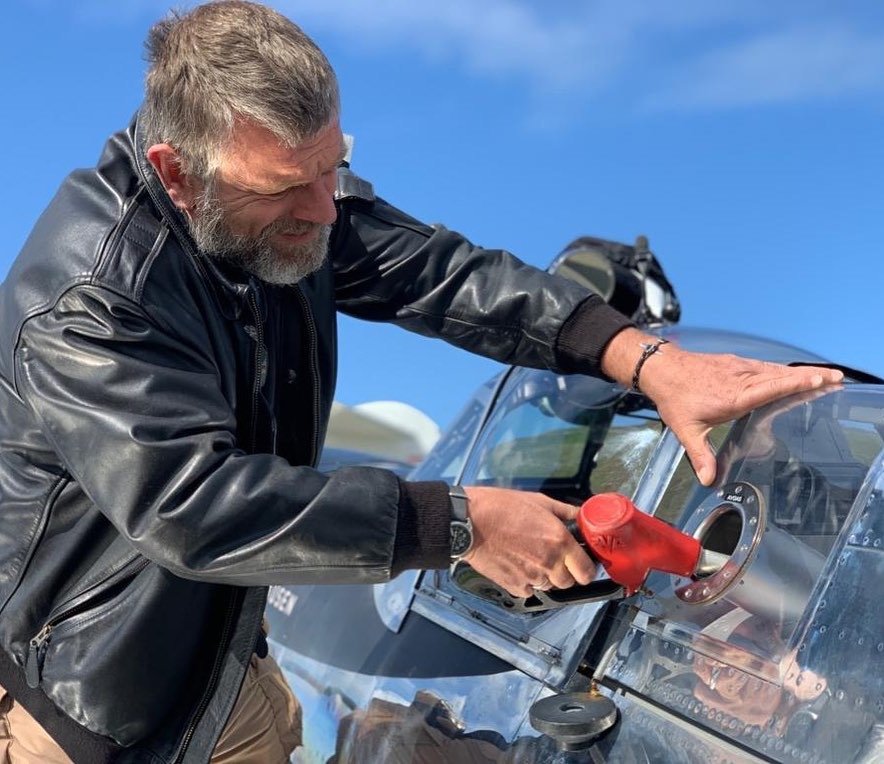 Duncan served in the Royal Air Force for the past 29 years and flew and instructed on many varied aircraft from the diminutive Chipmunk to the Harrier Jump Jet. Seven years of his career were spent flying and displaying Spitfires and Hurricanes on the Royal Air Force Battle of Britain Memorial Flight (BBMF).

“Before answering it is worth considering the Spitfire. In 1939 it was the state-of-the-art fighter with cutting edge technology – the modern-day Typhoon of its time. It has a 27 litre V12 Merlin engine that produces 1500 horsepower and juts skyward when on the ground, preventing the pilot from any forward vision on take-off and landing. The power of the engine and torque from the propellor can make the aircraft swing wildly on the ground, particularly in blustery conditions, and its power and momentum gave it a reputation for being difficult to take off and land. Take-off and landing accidents in Spitfires have claimed the lives of countless pilots over the decades.

The Spitfire can be equated to a thoroughbred horse; she is potentially skittish and hard to handle on the ground and a lot of training is required before mounting. She occasionally had mind to try and take you somewhere you didn’t want to go, like off the side of the runway!! But the power, torque and lack of visibility is not the only thing to contend with when flying a Spitfire.

The aircraft is a legend; it saved Britain from invasion in the dark days of 1940. It exemplifies everything that is British and the sight of it and the sound of its Merlin engine invoke pride and patriotism wherever it goes.

So, with the above in mind, flying a Spitfire evoked many emotions for me. No matter how often I flew it, it always commanded respect; for me there was always an awe in climbing into it and starting the massive engine.

The smell of the oil and leather in the cockpit, the deep guttural growl of the Merlin roaring to life with a blast of smoke and then purring smoothly at idle.

She needed careful attention on the ground, concentration needed constantly, particularly on the take-off roll. The engine at full power became a crescendo of beautiful deep reverberation, but once she had eased into the air and the wheels had thumped into their recesses, she became the most docile, beautifully balanced and magical aircraft to fly. The controls were light and responsive and it seemed that one simply had to think about putting an input into them and the Spitfire had already responded. She accelerated quickly and was wonderfully manoeuvrable.

When flying a Spitfire you couldn’t help but have a smile on your face, it never became normal, but there was also a responsibility that underlies the joy. You are constantly aware that it is a legend that you are flying. It represents the men and women that gave their lives all those years ago and must be treated with care, not to be taken to the edge of its envelope anymore! 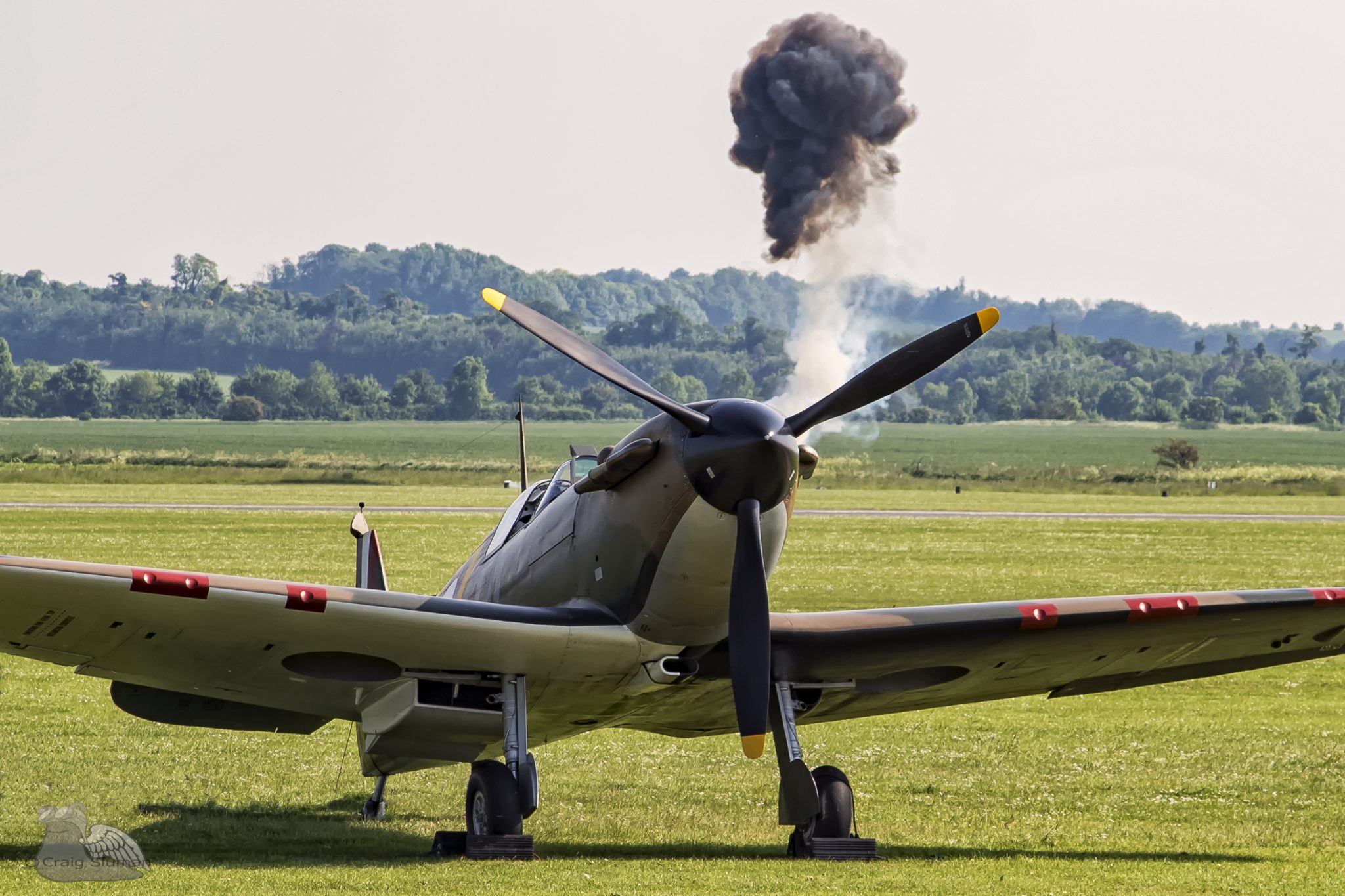 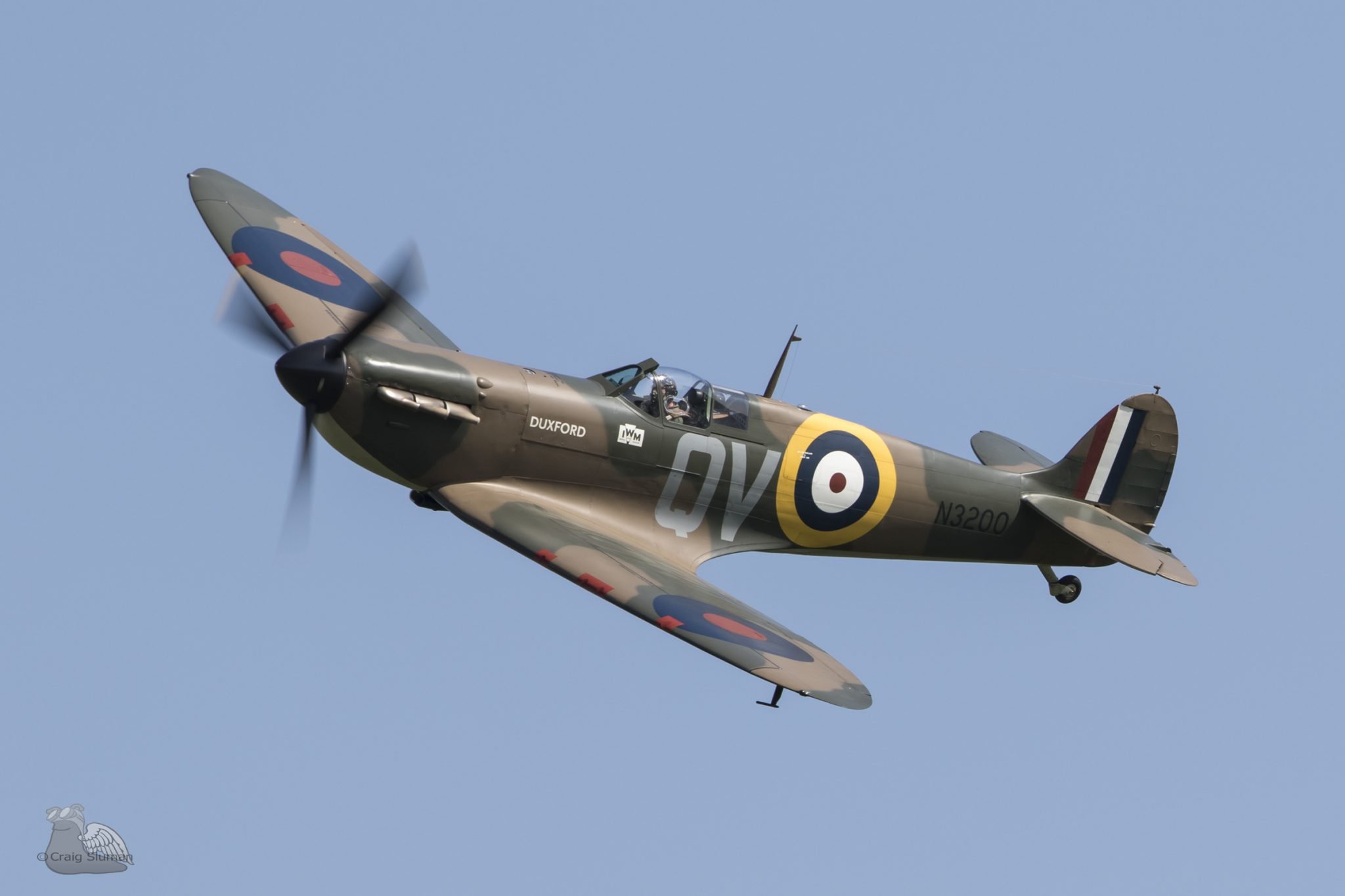 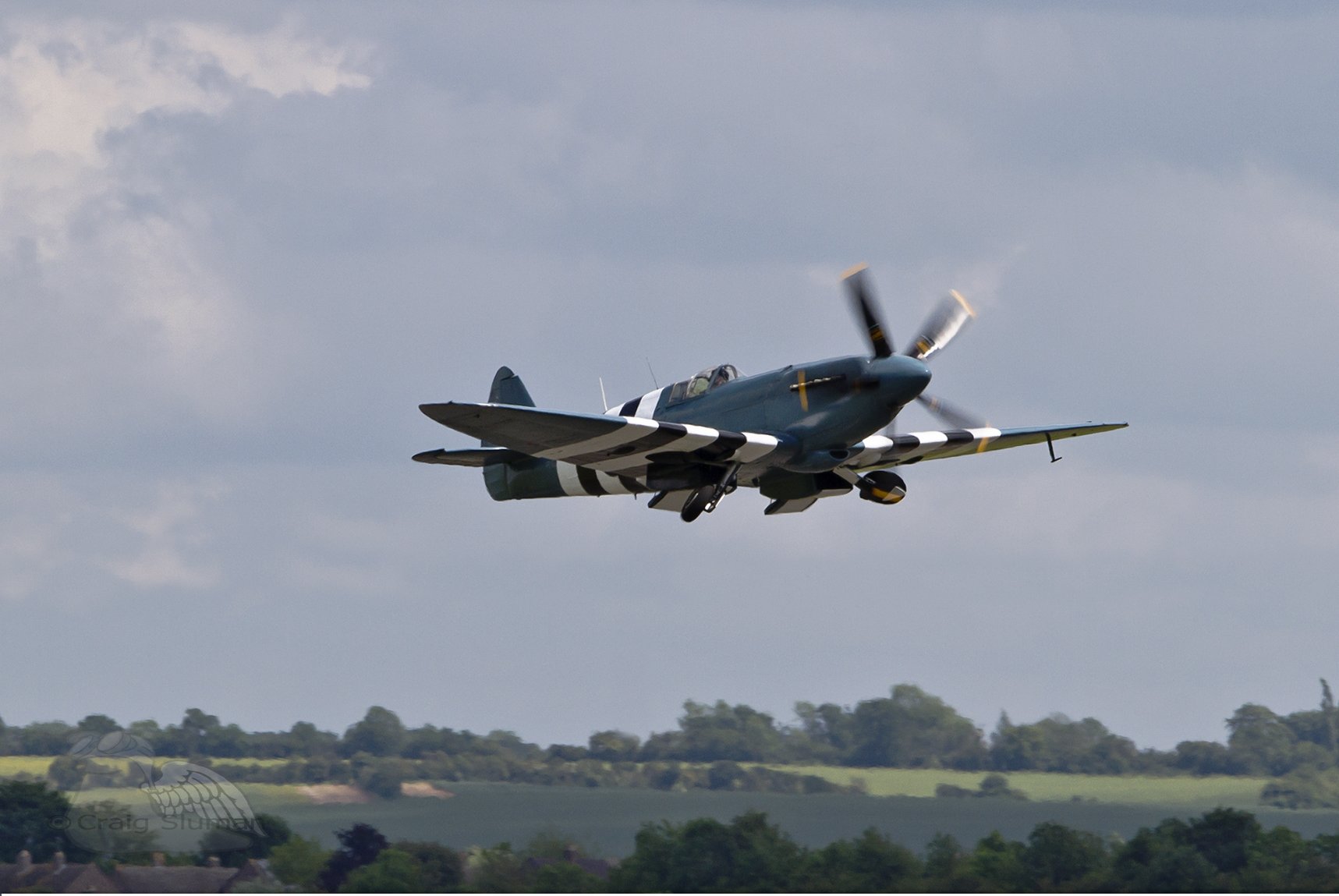 We often talk about the experience of flying a Spitfire, how would describe the landing experience?

I was lucky enough to meet Mary Ellis, and Air Transport Auxiliary Pilot that flew Spitfires, delivering them to front line units during WWII. She gave the most wonderful description of landing a Spitfire so I shall finish with her words. When I met her, she had her hand on the tail plane of the Spitfire I had flown into Goodwood Aerodrome. I said that she must have flown a few of them (over 400 to be exact) I said her landings must have been better than mine. She simply replied

Well, you don’t really land a Spitfire do you. It lands you.

My most memorable flight is very difficult to pick out. My first flight in a BBMF Spitfire in 2009 was, of course, very special; leading large formations of WWII fighters over London for commemorations linger in the mind; but I think the most memorable flight is one undertaken on the 15 September 2015 – Battle of Britain Day on the 75th anniversary of the Battle.

I led 32 WWII Spitfires and Hurricanes in an event that flew over a huge swathe of the South of England to commemorate the Battle. Taking off from Goodwood Aerodrome, a grass airfield that was RAF Westhampnett during the Battle of Britain, the first leg flew down the white cliffs of the Isle of White and over the Supermarine Spitfire Factory in Southampton. Alongside me on my left was a 2 seat Spitfire carrying WWII Spitfire veteran Tom Neil.

It was an unbelievable privilege to lead such an event alongside one of the heroes from the Battle itself and incredible to see the huge crowds of people gathered at the various locations that we flew. A British Airways airliner even asked if he could deviate from his route to see the spectacle! On landing back at Goodwood we met with Tom Neil and Prince Harry. Quite a trip!

About the RAF BBMF

The Battle of Britain Memorial Flight is based at the Typhoon base, RAF Coningsby in Lincolnshire.

The mission of the RAF BBMF is to maintain the priceless artefacts of our national heritage in airworthy condition in order to commemorate those who have fallen in the service of this country, to promote the modern day Air Force and to inspire the future generations. 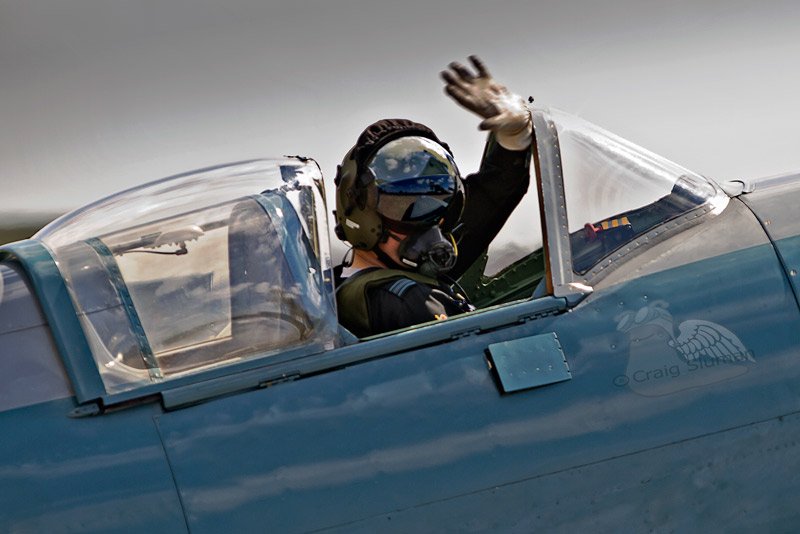 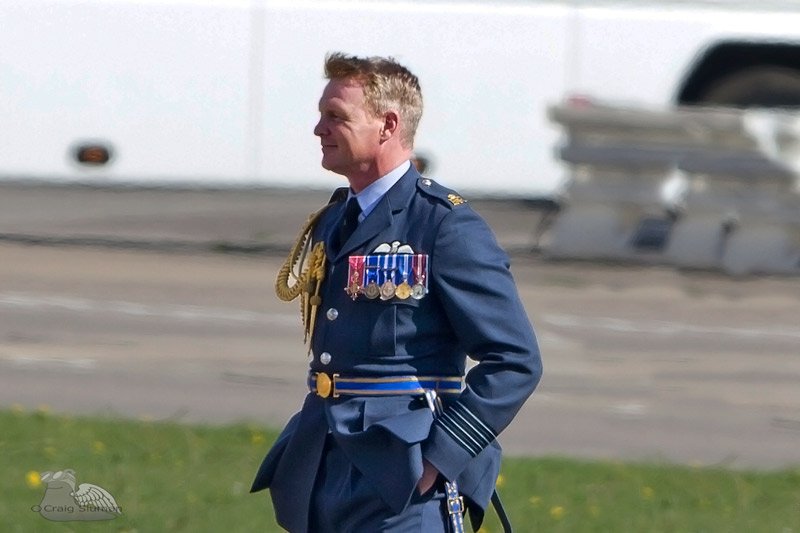 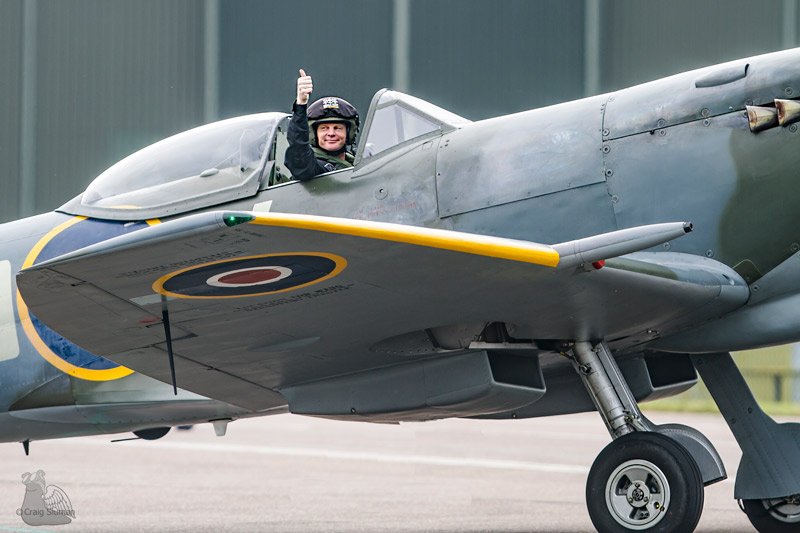 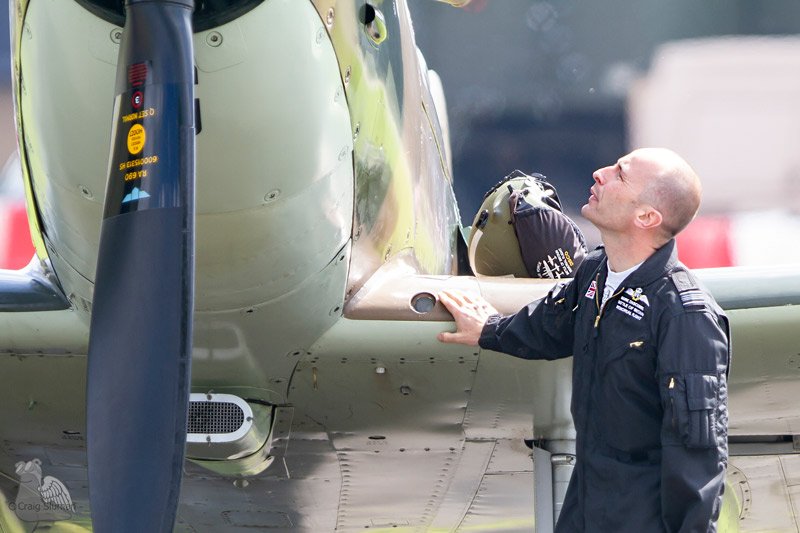 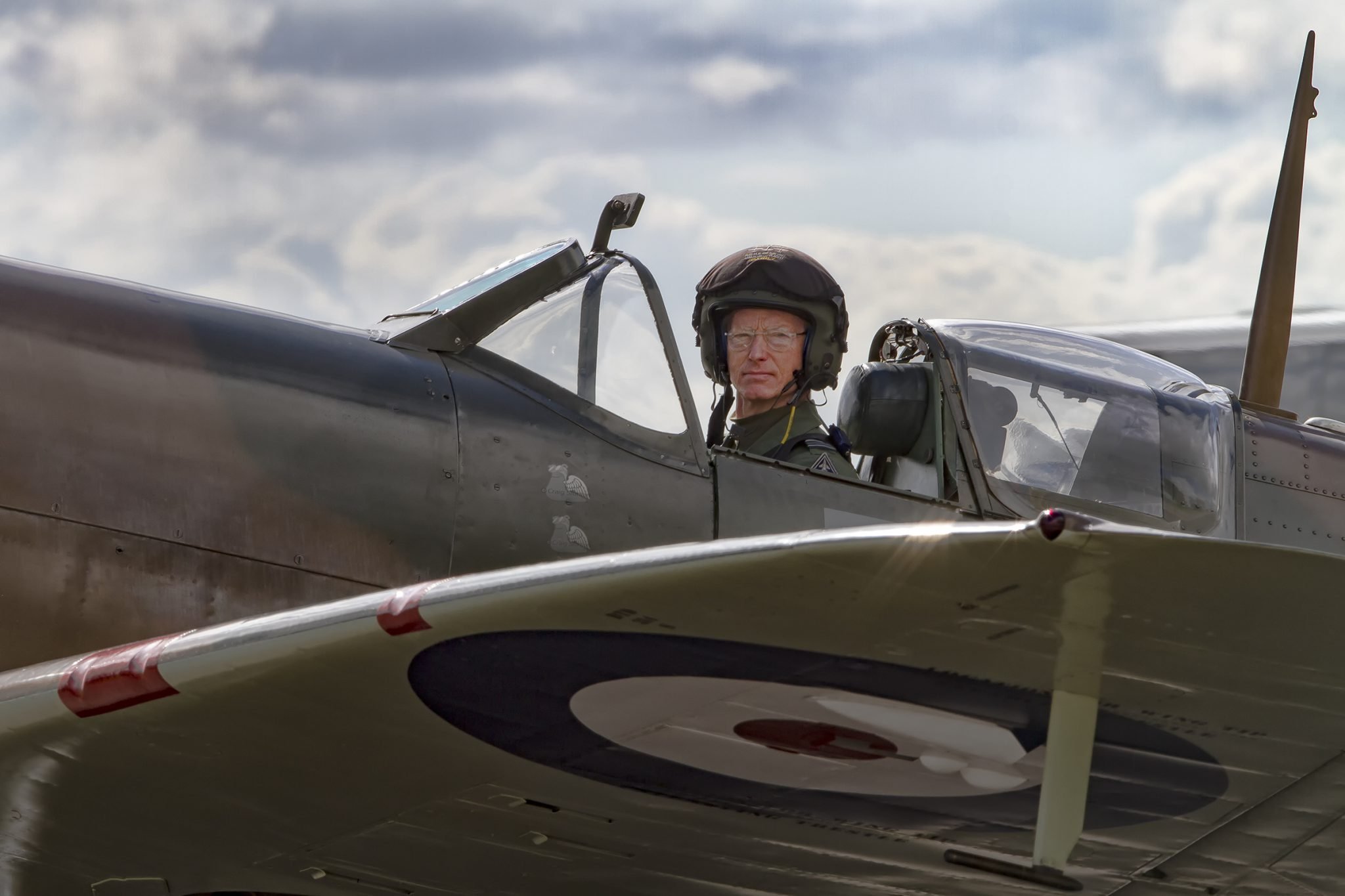 Find out more about us, our story and our work with charities here.

We are delighted to support the BBMF through donations to their members ballot, attending their annual event and donating to both the RAF Association and the RAF Benevolent Fund with every sale we make.

Thanks to our contributors, Ian, Duncan and photographer Craig Sluman.

Celebrating 80 years of the Battle of Britain – what to watch and read.

Brothers Colin and Ewan McGregor take us through the timeline of events. Colin, an RAF veteran of 20 years, and his more famous movie star brother have always shared his passion for aviation.

Fiona takes to the skies in a Spitfire and the show covers details of the Battle and the Blitz. More here.

Ben Shepherd Takes to the Skies in a Spitfire.

“It has always been Ben’s dream to fly in a Spitfire and now he has had the chance to do so to commemorate the Battle of Britain’s 80th anniversary on the 15th September and how the Spitfire was crucial to Britain’s victory” Watch it here.

Spitfire Voices – from the mouths of those that flew them.

From it’s radical design to it’s role in history, hear from those that were closest to it. Watch here

This new hour-long one-off documentary follows national treasure Sir David Jason as he meets the RAF team who fly and maintain the country’s historic aircraft that make up the Battle of Britain Memorial Flight.

Marking the 80th anniversary of the Battle of Britain – a Second World War campaign in which British fighters attempted to keep the country safe against attacks from German pilots – this year is particularly notable for the Memorial Flight, which consists of 12 aircraft.

WATCH the Battle of Britain Memorial Flight in Guernsey

A rare sight in 2020, watch one of the few airshow displays from the BBMF this year here.

READ: The Young Americans that gave their lives to fly to glory with the RAF

It has been referred to as our most interesting hour, however the Battle of Britain additionally proved to be a time of honor and sacrifice for ten courageous Americans who joined the combat, duelling to the dying with Nazi fighters and bombers in heart-stopping arial canine fights. Read more here.

“I dip the wing tip into a cloud and gently ease back the control column. The Spitfire pirouettes through the sky in a balletic arc.” Read more here.

‘The spine tingling tribute to the valour of The Few’ (The Telegraph) Opens September 15th. We haven’t been yet but can’t wait to visit. Find out more here.